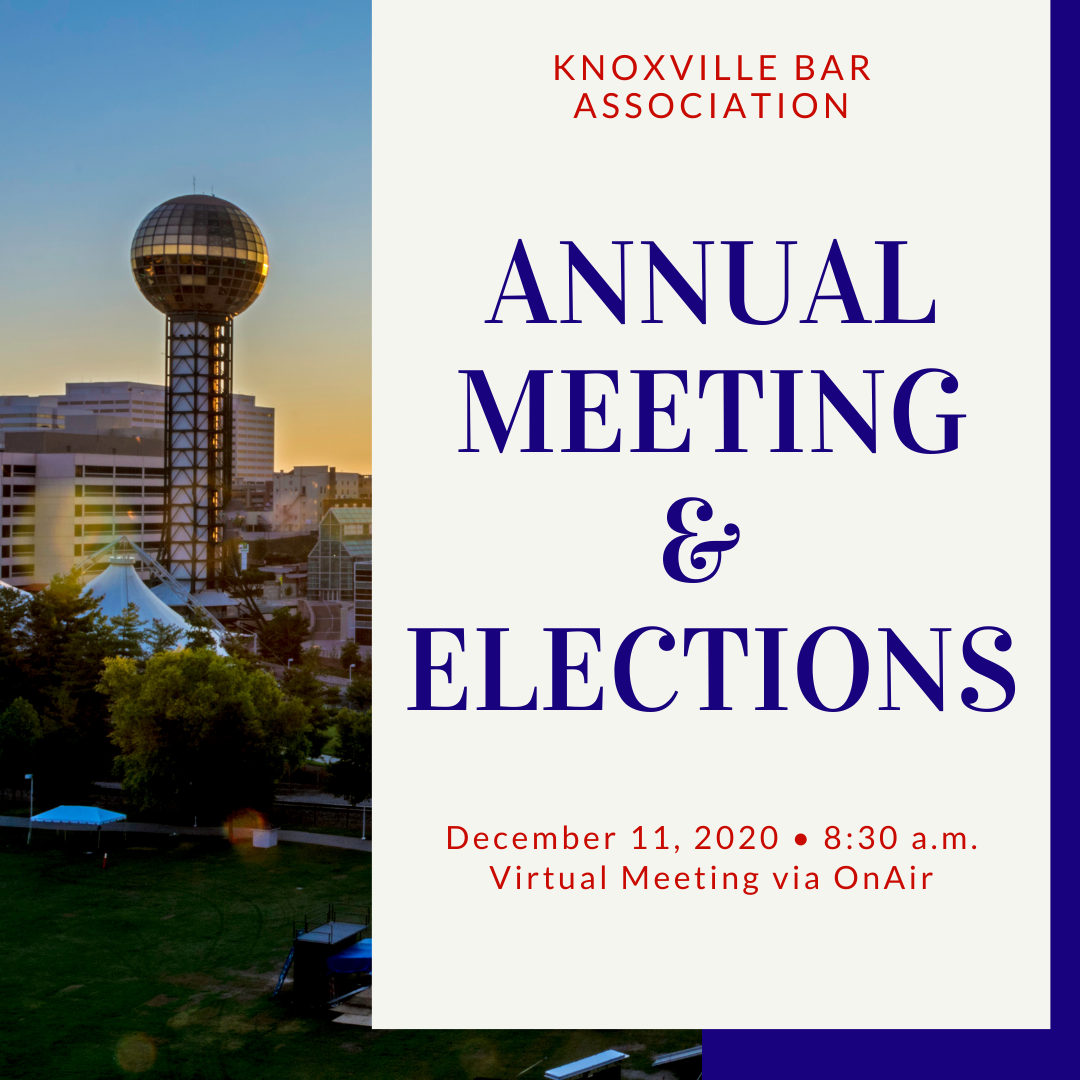 REGISTER FOR THE 2021 ANNUAL MEETING

President Tipton thanked his fellow board members for their support of his year and recognized the KBA staff for their dedication to East Tennessee attorneys, especially during the COVID-19 pandemic. Incoming President Cheryl Rice thanked Mr. Tipton for his service to the Association, which included innovative virtual programming, construction of a Habitat for Humanity house, and regular town halls with court officials. Ms. Rice discussed how her term as President would focus on ways the Association can better serve members' needs to meet the challenges and struggles imposed upon local attorneys in the current moment, trying to work during the COVID-19 pandemic.

During the meeting, the following KBA members were elected as officers for 2021:

The membership elected the following KBA members to the four open positions on the Board of Governors:

Dwight E. Tarwater, Paine | Tarwater | Bickers, LLP,  was presented the KBA's highest award, the prestigious Governors' Award, which is given annually to a lawyer whose peers believe has brought distinction and honor to the legal profession. Mr. Tarwater has distinguished himself with a long and tremendous career of service to the bar and the community, including serving as General Counsel to Governor Bill Haslam.

Retired Criminal Court Judge Mary Beth Leibowitz was presented with the Judicial Excellence Award. The Award recognizes judges felt by the Association’s Board of Governors to be deserving of special recognition.  The award has existed for many years.  It has rarely been given.

The Presidents' Award for 2020 was presented to Denise Moretz of Woolf McClane Bright Allen & Carpenter. Ms. Moretz was recognized for her work on the recently published "Planning Ahead: A Guide to Protecting Your Clients' Interests in the Event of Your Disability or Death" to assist lawyers with succession planning. The awards for outstanding writing were presented to Phillip Hampton and William T. Ramsey for their column, which appears in the KBA monthly magazine DICTA. Nick McCall was also given special recognition for his Last Word Column he has authored for DICTA since 2008.

Amanda T. Tonkin, an attorney with the Social Security Administration, was introduced as President of the Knoxville Barristers, the Young Lawyers Division of the KBA. It was announced that during the elections earlier this week, the following were elected as Barristers Officers:

It was also announced that Mitchell Panter and Matt Knable, Co-Chairs of the Volunteer Breakfast Committee, were presented with the Barristers' Presidents' Award for 2020.